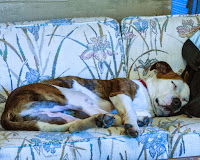 Several weeks ago we found a stray dog roaming our street. You can read about our finding him here. What I did not say was that he was neutered and his nails were well trimmed. Overall, this dog looked well taken care of and must have a family that loved him. When this dog met our Buster, his whole demeanor changed. His ears perked up, he stood taller and his tail wagged and pointed up. When Buster was not around, the ears went down, his stance was lower and his tail was tucked between his legs. He would still lick my face and be very loving.

He did have a limp and I wanted a vet to see him. We had to take him to Front Street Animal Shelter. He touched my heart and each day I checked the First Street Shelter website to see when he would be available for adoption or better yet be returned to his family. Today, he was not listed anywhere. I do not know what happened to him. Can only hope his family found him. 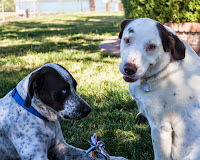 It is time to hug our dogs and be thankful we have them.