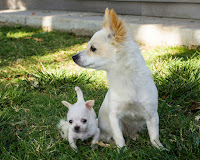 It appears Bella (II) was adopted today at the Sacramento SPCA (SSPCA), during the "Road to the Puppy Bowl" by the Animal Planet promotion. Am elated that Bella was adopted. Her new forever family is very lucky. She is a great companion and will make a fantastic addition to their family. Bella is almost 1 1/2 years old. When the SSPCA took her in, they had no idea she was pregnant. On March 13th, she gave birth to 3 puppies. Only 1 has survived. That puppy is now only 8 weeks old, 20 ounces and very small. He is doing well. (Sleeping in my lap as I write this post.)

All animals that are adopted during this promotion are free, i.e. no adoption fee for adopting families. The fee is paid by Animal Planet. This is a great deal for anyone adopting a new family member. The promotion and good will that the SSPCA receives are very good things. This promotion will help them to save many more animals and hopefully slow down what seems like an ever increasing population of dogs and cats.

The Front Street Animal Shelter's posted this story on their Facebook page. I have no idea if the story is true or not, but am sure there are many families similar to the one illustrated. Most of us tend to value that which we work for more than that which is given to us. For this reason, it bothers me that some people might interpret this promotion to mean the animal they adopt has less value and maybe more disposable. Paying a fee to adopt, seems to start off the process with an understanding of responsibility for the animal. Adopting a dog or cat into a family really does need to be seen as a major undertaking for that family. This animal could be with you for 20 years. They will not be the same experience tomorrow as they are today. 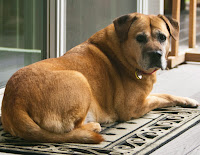 In 2006 we adopted Rosie from the SSPCA. She was a 6 1/2 year old German Shepherd / Rottweiler mix. She had been through at least 2 shelters and available for adoption for more than 9 months. Because of her situation, the SSPCA waived the adoption fee. We did not ask for and did not want the discount. We donated the fee to the SSPCA. Rosie was a wonderful part of our family for many years. We will always remember and love her.

Can only hope that the lucky family that adopted Bella understands the commitment they are undertaking. The long term love, affection and companionship that Bella has to offer is well worth all the costs.